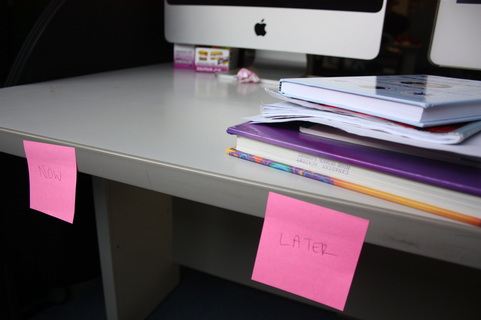 In the battle of procrastination between ‘now’ and ‘later,’ ‘later’ drags

‘now’ brutally through the ground, blood smeared across with limbs

of them, so why can’t they look past the sadistic pleasure of the handful

of hopeful hours? Maybe it’s the misguided assurance of all the time

left, or maybe it’s the short lived happiness clouding the view; but

whatever it is, it exists and is swarming every corner of Canadian


But why isn’t it just one person? Or a handful of individuals at most?

personal level? It all starts with an idea; a seed planted in the abundantly spaced brain of every student that manifests rapidly. Then it does what ideas

always tend to do – spread. And suddenly this isn’t an idea anymore but an ever growing cancer showing no signs of stopping. This disease is


The idea is that it’s okay; okay to leave work for ‘later,’ okay to extend deadlines if students disagree with them, okay to introduce a policy that

postpones the due date while leaving the grade unscathed. It’s a zone of comfort that keeps getting bigger and bigger as the days go by, and everyone


So the inevitable question surfaces, why not finish your work first and enjoy the time you're left with later? Lack of motivation and lack of caring is the

inevitable answer. The instant rush of ecstasy has a higher value in the mind of an average CA student than the security that the work is finished.

Because that’s how we think – short term. Everything only matters when we’re directly facing it, and the teachers have begun to accommodate this


Even though every educator in the school condemns procrastination and everything it stands for, the rest of the school does not, and even the

teachers are finding themselves helpless against the students' pursuits in procrastination. With the introduction of the 5-day policy, where work can be

handed in five days after it was supposed to be finished with the overall grade taking no hit, procrastination has more time to harbour than ever. The

very place that frowns upon leaving work until the last minute is providing extra room to finish it, disregarding their own opinion as they go on.


In addition, teachers have become understanding and reasonable over time, and students are taking complete advantage of that. With the convenient

deferrals that happen on a regular basis, the reliance for postponement is increasing and the teachers don’t disappoint. Because of this, work doesn’t

get started until the last minute, with the assumption that at least one extension is on its way. ‘Now’ is one heck of a fighter, but is losing its will to keep

going on when no one instills the same amount of faith in it than they do on ‘later.’